Tuscany is a region rich in the city to visit, seaside towns where fun and relaxation blend providing tourists an enjoyable and relaxing holiday.
Be seduced by this beautiful region, from its beaches, its pine forests, green hills and rich vegetation, the high peaks of the Apuan Alps.
But let even conquer the typical Tuscan products, wines, sausages, soups and desserts.
Here we provide information about some of the most beautiful city known for depth but visit the portal for tourism in Tuscany Holidays in Tuscany .

Pisa and surroundings: guide to the monuments of the city

All over the world to Pisa is famous Piazza dei Miracoli With the famous Leaning Tower. 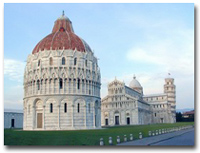 Piazza dei Miracoli is one of Italy's most famous squares in the world. Also known as Campo dei Miracoli, the square is the center of religious life of the city, right on the monuments that are: the Cathedral (Duomo di Santa Maria), the Baptistery, the Cemetery and the Campanile, better known by the name of the Leaning Tower .
Piazza dei Miracles have been declared World Heritage by UNESCO in 1987.

We suggest you also visit the Museo Nazionale di San Matteo, on Lungarno Mediceo they are works of art of painters such as Fra Angelico, Donatello and Masaccio.
Another step should not miss the Piazza dei Cavalieri, commissioned by Cosimo I de 'Medici, who wanted to create a home for the Order of the Knights of Santo Stefano.

In the Piazza, you can admire the Palazzo dell'Orologio, whose arched facade was designed by Vasari in order to join two existing buildings. This building was founded on the ruins of the Torre dei Gualandi, also known as the "tower of hunger" to remember the horrific death of Count Ugolino, as also mentioned Dante in his Divine Comedy, "was imprisoned here and died of hardships." 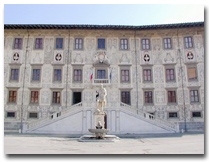 Most of the buildings of the square are the work of Vasari.
It was in this square is one of the most prestigious Italian universities: the Scuola Normale Superiore di Pisa, founded by Napoleon in 1810 as a branch dell'�cole Normale Superieure in Paris, in two centuries, became a reference for training and research nationally and internationally.
Still remaining on the university you can admire the Palazzo della Sapienza, headquarters dell 'Universit� degli Studi di Pisa , Built in the early 14th century and reinforced by Cosimo and Lorenzo de 'Medici: Aula Magna fascinating portrait that preserves some of the most celebrated masters of the University of Pisa and the Statue of Emilio Demi, portraying Galileo Galilei and frescoes by Adolfo de Carolis.
Inside the palace the seat of the University Library which preserves ancient manuscripts and books of great value.

Near the station, just on the left in Piazza Vittorio Emanuele II, you can admire the work of the genius of Keith Haring, built in 1989 on the wall of the Convent of St. Anthony just 2 years before his death. This mural, created in collaboration with some students of Pisa, was named "Tuttomondo" summarizing his constant search for meeting and identification with the public.

You can visit Pisa more detail on pisa.guidatoscana.it

The surrounding area of Pisa: the nature, the spas and other Tuscan cities

La Certosa di Calci, located a few kilometers from Pisa, is one of the largest monastic complex in Tuscany.
It was built in 1366 and 600 underwent a major expansion in the Baroque style, which still retain the frescoes, among the most important in Tuscany.

Today, the Monastery has become National Museum, and houses the Museum of Nature and Space, University of Pisa.

If you want to visit not only the artworks but also the nature of Tuscany, the area around Pisa is an interesting place to be discovered: the Natural Park-San Rossore Migliarino-Massaciuccoli, which with its 24 thousand hectares of alternating beaches, Mediterranean, pine forests of pine, wetlands and cultivated.

Pisa is situated in a strategic position close to other beautiful cities and places in Italy, easily accessible by train, bus or car.

For those who want to take advantage of a holiday to relax and enjoy what nature has given to these areas, San Giuliano Terme is a perfect place to enjoy the beneficial properties of its waters.
For more information, to find offers, last minute vacation packages and you should visit Guidapisa.it

Montespertoli: in the heart of Tuscany

Located in the typical landscape of Chianti, a few kilometers from Florence and equidistant from Pisa, Siena, Volterra and San Gimignano, Montespertoli is a place full of majestic hills and ridges, where alternate long stretches of vineyards, olive groves and ancient medieval castles.

A pristine heritage that gives you the opportunity to visit, understand and explore the treasures of this marvelous land. Guida Lastminute Tuscany Tuscany and found various types of living only to make your stay, with horseback riding, food and wine tastings of the Wine Route and numerous sports and cultural activities.

In the territory of Montespertoli you can admire the numerous medieval castles and churches around the capital: the churches as simple as striking Church of San Piero in Market which houses the Museum of Sacred Art where you can admire the true treasures such as the Madonna by Filippo Lippi, saved precious, sacred vestments and silverware.

For lovers of 'food and wine, Montespertoli offer the possibility to visit the Center for the Culture of Wine "I Lecci", the maximum expression of the culture of good wine and good food, typical of Tuscany.
In Center "I Lecci" held the Congress Center and Exhibition, Wine and the Wine Museum, the soul of the building: a course that brings together the testimonies of the culture of the main product of the territory, the wine.

Events in the territory of Montespertoli

Versilia: the Tyrrhenian coast for your holidays in Tuscany

Versilia is a part of north-western Tuscany, within the province of Lucca.
It includes the towns of Viareggio, Camaiore, Forte dei Marmi, Pietrasanta, Massarosa, Stazzema, Seravezza.
Long white sandy beaches, green pine forests, the Apuan Alps, the hills and valleys: in this scenario is unique in the world that distinguishes the Versilia.

Versilia offers you the opportunity to practice water sports such as swimming, sailing, surfing and windsurfing. You will have the opportunity to take long and relaxing walks in the pine trees in the woods or in parks.
For those who want to practice golf and loves the outdoors and nature, in Versilia are many fields equipped to practice this sport in any season.

Throughout the year, both day and night, the Versilia offers opportunities for entertainment and fun thanks to the many local clubs, pubs and restaurants dotted along the coastline.

Not lacking important cultural events, appreciated and known as the Puccini Festival, the Carnival Viareggio, the Versiliana. Fixed appointments that recur every season and that recall thousands of tourists every year.
In Versilia, there are numerous hotels, pensions, residence suitable to the needs of all tourists.
For more information, to find deals, last minute vacation packages and you should visit Guidalucca.it

The Carnival of Viareggio

If you can not miss the Carnival 2007, one of the most important and carefree in Versilia.
Come and discover the atmosphere of joy, serenity and happiness that you breathe in Viareggio each Sunday, when the huge papier-m�ch� floats parade on the promenade of Viareggio, accompanied by festive music and thousands of people masked.
Suitable for all, the Carnival is the opportunity to meet new people, in an atmosphere of celebration, solidarity and peace.

More information about the Carnival of Viareggio

Even this year to Torre del Lago will be able to hear the wonderful melodies of the works of Giacomo Puccini, who lived here and wrote some of his best works.
This year the festival brings in scene 4 beautiful works: the Tosca, Madama Butterfly, La Rondine, La Boheme and Turandot.
Below is the schedule of the Festival.
For information about costs and tickets visit official site of the Puccini Festival.

The Versiliana The Festival, now in its twenty-seventh edition, this season also presents a varied program of events.
In July and August you can attend performances of great evocative reminder. In the afternoon, the Caf�, you can participate in meetings with prestigious guests: you talk about politics, current events, and more.
The theater, in the woods between Pietrasanta and Forte dei Marmi, is home to major events in a perfect balance between drama, dance, music and cabaret, in the skilful combination of tradition and innovation.
For more information, visit the Official site Versiliana Festival.